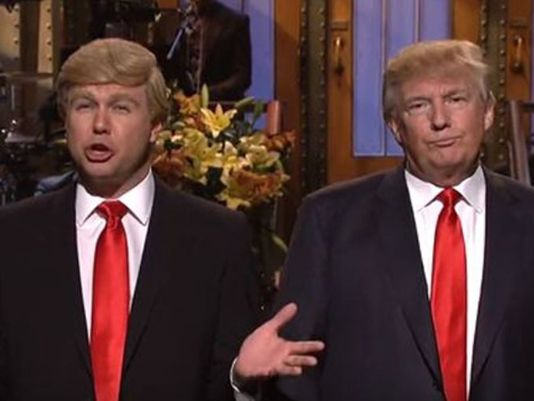 Donald Trump has been in the news almost nonstop since he announced he was running for president in June of last year. Since then, he has had a knack for making controversial, out-of-the-box statements that have provided plenty of fodder for news outlets and political satirists alike. And yet — despite all of his tomfoolery — Trump not only remains in the race, but is a front-runner for the Republican presidential nomination.

Although John Oliver’s video about him has recently gained particular virality, Trump has been the focus of late-night satire since the beginning. There are literally hundreds of Trump-related segments to which I could link — there is rarely a night when his name isn’t uttered by the likes of Stephen Colbert or Seth Meyers. You would think that, with all their mockery, these hosts would have convinced American voters that this guy is a nut job, definitely not deserving of anyone’s support. Nonetheless, Trump has won 460 delegates in the Republican presidential primaries and is showing no signs of slowing down.

This leads me to believe that not enough Americans are embracing political satire.

I am convinced that satire and humorous news outlets play an immensely important role in allowing people to look at politics from a different perspective, and perhaps with a more critical lens.  Satire not only makes politics more accessible, but it also brings to light politicians’ many absurdities, inconsistencies and hypocrisies, which may not necessarily be obvious from simply reading the news and watching speeches or debates.

Likewise, satirists simultaneously communicate news and criticize the state of political media. Some forms of media have clear biases for or against certain candidates, and it’s important to take this into account. Because late-night hosts aren’t required to remain objective, they can more readily — pardon my French — call other people out on their shit.

Ultimately, I feel that supplementing one’s intake of news and political information with satire allows for a more well-rounded perspective on current affairs. By using humor as a lens through which to observe the flaws of our (potential) leaders, we can challenge the information we are being presented by thinking about it from a different perspective.

And that’s exactly what I think some Americans need — perspective.

Though I firmly believe that each person has the right to vote for whomever they believe best aligns with their views, I also think it’s imperative to remain informed about and critical of all the candidates. Thus, I think many current Trump supporters could benefit from watching a bit of political satire and taking into account the many criticisms that are being aimed at their chosen candidate.