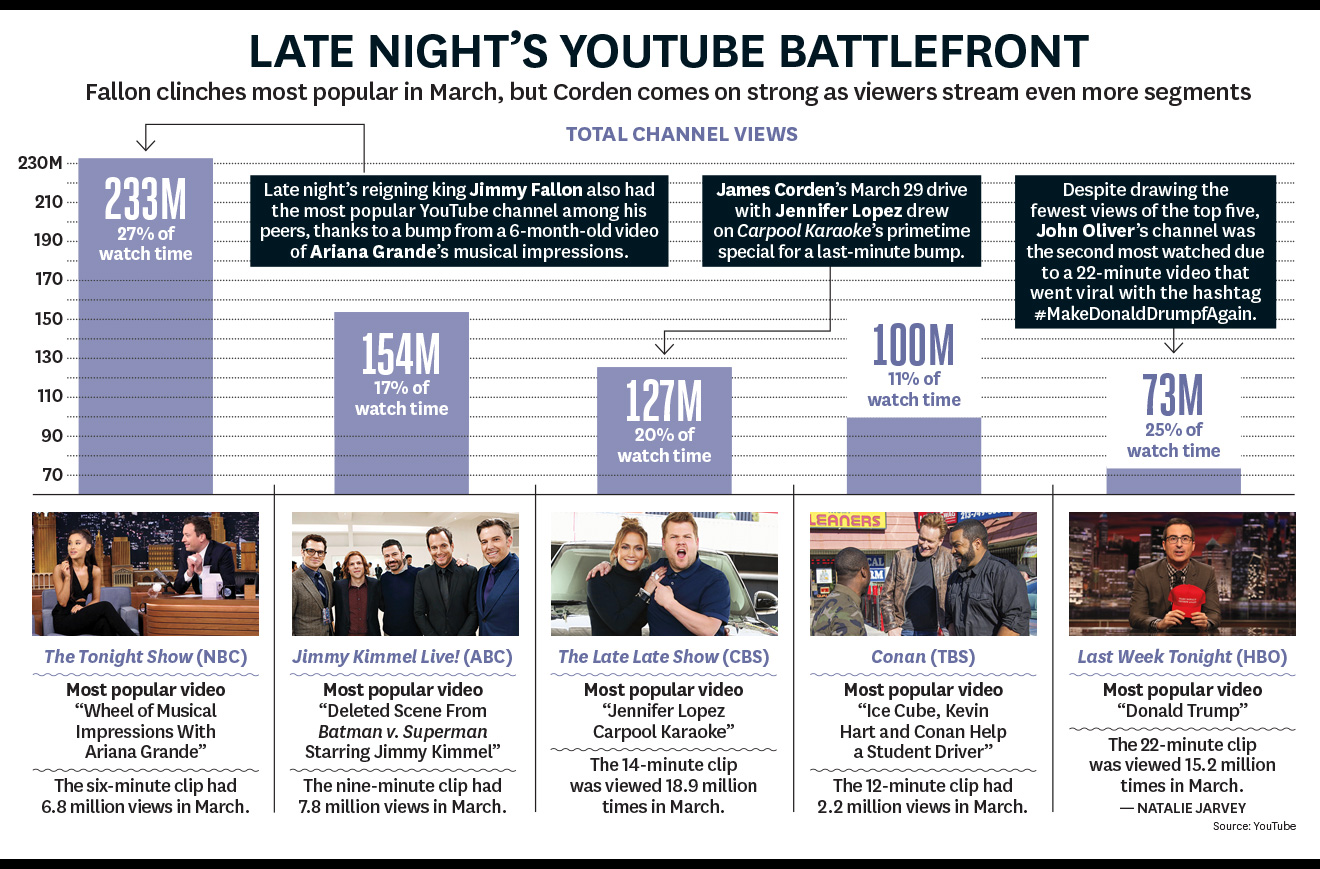 Years ago, people who wanted to hear a nightly comedy monologue and see their favorite celebrities interviewed on TV had to gather around the television set and tune in when the “Tonight Show” or “Late Show” aired. If viewers missed an episode, there was little chance they would get another chance to see it, and they would thus would have to rely on hearsay to find out what happened. This, in fact, was the case until the internet and social media came around, providing a platform to share late-night content beyond its traditional late-night setting.

Today, most young people who are watching Jimmy Fallon’s celebrity shenanigans or John Oliver’s infotainment segments are probably not doing so in front of a television set, or even late at night. A large portion of these shows’ viewership comes from social media shares and internet virality.

Because of this, late-night shows are no longer just competing with one another for viewership, but also with all of the other media floating around on the internet on a daily basis. This has undoubtedly had an impact on the type of content these shows produce, as well as the way in which they are written.

“(Late night) is changing to become a bit more relatable to a younger audience,” said John Holdridge, Fullscreen’s vice president of Channel+, which helps advise the digital strategy for late-night shows. “They are realizing that the younger audiences are more powerful, and if they like content — they will share the content, they will talk about this content, and they will interact with it more intimately.”

However, that doesn’t mean all of late-night has turned to cheap gimmicks and clickbait (à la Jimmy Fallon). While such clips are popular, there is something to be said about hosts like John Oliver, whose videos are seeing huge success despite being an average of 20-minutes in length and addressing such dry issues as credit reports and special districts.

Over time, late-night shows have been forced to adapt to changing patterns of consumption in order to stay relevant. Millennials are still interested in the content on late-night shows, we just don’t want to watch it on TV. We prefer shorter segments we can watch on our own time and share with our friends.

“The Daily Show” and “The Colbert Report” were among the first shows to take advantage of the internet to promote their content. In doing so, they were able to appeal to younger viewers, and to influence political discourse beyond the television screen.

Others who were less adept at getting with the times have seen their ratings falter.

“I still enjoy what I’m doing, but I think what I’m doing is not what you want at 11:30 anymore,” former “Late Show” host David Letterman told Rolling Stone last May.